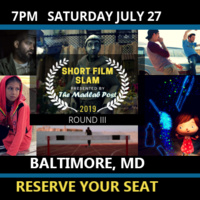 Grab your friends and come enjoy an international selection of our top dozen short films presented by The Madlab Post on Saturday July 27 at The Motor House. Show starts at 7pm.
Attendees get to cast a vote for their favorite film among a mix of animation, documentary and live action shorts during this tournament style showcase exploring themes such as Alzheimer's, empty nest syndrome, STEM, aging and genetic modification.
Temptation of St. Francis, a comedy about what happens in your garden when you're not looking, will be among the films on view alongside Birthday Night, a Persian drama about two co-workers whose friendship is on the brink of collapse after a car accident.
Our lineup also includes storyboard artist Arna Selznick's inspirational animated film The Most Magnificent Thing starring Academy Award winner Whoopi Goldberg, Alison Pil (Vice, American Horror Story) and Lilly Bartlam (The Handmaid's Tale) about a little girl's quest to create a masterpiece for her pet dog.  Don't miss  out on these films, and more!
Saturday / July 27, 2019 The Motor House 120 W North Ave, Baltimore, MD 21201
See all these films for only $10 in Advance ($15 at the Door) 6:30PM - Doors Open for Seating 7:00PM - Show Begins

Advance tickets are $10 online and available now. Walk-In/Same-Day Tickets are $15 at the door.