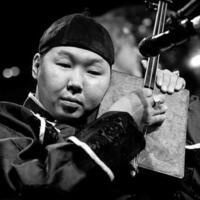 All of the performers will be rehearsing at WTMD in the days leading up to the show, which will be recorded for Bady Dorzhu's upcoming solo album. The result will be a mix of Tuvan throat singing, beatboxing, classical music, rapping and much more.

Alash Ensemble are masters of Tuvan throat singing, a remarkable technique for singing multiple pitches at the same time. Believing that traditional music must constantly evolve, the musicians subtly infuse their songs with western elements, creating their own unique style that is fresh and new, yet true to their Tuvan musical heritage. Their last album, "Achai," featuring guest performances by Baltimore's own Shodekeh, was inducted into the Smithsonian Folkways Recordings.

The multi-talented vocal artist Shodekeh founded EMBODY, a celebration of the human voice, which has been hosted at WTMD, the Windup Space and other locations around Baltimore. He has collaborated with Alash many times in the past several years, and has appeared in multiple documentaries showcasing the power of the human voice.

One of Baltimore's all-time greatest rappers, Eze Jackson performs as a solo artist and at the front of the experimental jazz/funk ensemble Soul Cannon. His latest solo album, "Fool," was just released. He spent several years in politics, leading the Marylanders for Marriage Equality initiative to have same-sex marriage legalized in the state.

Rafaela Dreisin and Stephanie Ray founded Classical Revolution Baltimore with the goal of bringing classical music out of the symphony hall and into multi-purpose spaces such as bars, clubs, cafes and more. They are both classically trained musicians who lead a rotating ensemble of brass, wind and percussion instrumentalists, as well as beatboxers, rappers and more.

Doors open at 7:30 p.m. and the show starts at 8 p.m. at WTMD, 1 Olympic Place in Towson. Tickets are $25 for reserved seating and $20 for general admission standing in advance, and an extra $5 each at the door. Sponsored in part by Cunningham's, Boordy Vineyards and Coney Island Brewery.