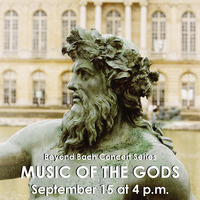 Beyond Bach Concert Series: Music of the Gods

The Bach in Baltimore Orchestra opens its first BEYOND BACH Series Concert: Music of the Gods with Handel’s ebullient Water Music. This spirited and stately work for horns, oboes, bassoon, strings, and continuo is fit for the gods and goddesses atop Mount Olympus. Handel composed it for a concert on the River Thames for King George I. After such royal fanfare, the music will turn fiery and call to mind the Roman God of War, Mars with Beethoven’s Egmont Overture, Op. 84. Composed during the Napoleonic Wars after Napoleon Bonaparte crowned himself Emperor in 1804, Beethoven’s blistering work expresses his political outrage over Napoleon’s overreach of power. The “Sturm und Drang” will continue with Mozart’s monumental Symphony 41 in C major or the “Jupiter” Symphony. Mozart’s masterpiece, coined for the Roman God, Jupiter opens with a thunderous clap of strings and horns that builds to a finale of fireworks of breathtaking sound. The “Jupiter” Symphony is Mozart’s longest and last symphony, and it stands not just as one of Mozart’s greatest musical achievements, but as one of the most awe-inspiring compositions of Classical music.