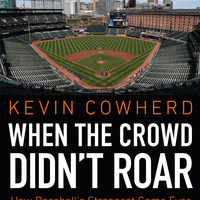 "When the Crowd Didn't Roar: How Baseball’s Strangest Game Ever Gave a Broken City Hope" is about the Orioles-White Sox game on April 29, 2015, the only Major League game ever played without fans. Baltimore was reeling from the devastating riots sparked by the death in police custody of Freddie Gray. The eerily quiet stadium was on lockdown for public safety and because police were needed elsewhere to keep the tense city from exploding anew.

After his remarks the evening of April 24, Cowherd will do a book signing, and a photo opportunity will be available.  Books must be purchased in advance; they will not be available that evening. For those interested in purchasing a book, the publisher is offering a 40 percent advance discount (enter the code 6AS19):

Cowherd's book chronicles this unsettling contest, as well as the tragic events that led up to it and the therapeutic effect the game had on a troubled city. The story comes vividly to life through the eyes of city leaders, activists, police officials and the media who covered the tumultuous unrest on the streets of Baltimore. The ballplayers, umpires, managers and front‑office personnel of the teams who played in this singular game as well as the fans who watched it from behind locked gates also share their experiences. In its own way, amid the uprising and great turmoil, baseball stopped to reflect on the fact that something different was happening in Baltimore and responded to it in an unprecedented way, making this the unlikeliest and strangest game ever played.

Cowherd is an award‑winning sports columnist and features writer who worked for The Baltimore Sun for 32 years. He is the New York Times best‑selling author of "Hothead," "The Closer" and four other baseball novels for young readers written with Cal Ripken Jr. He is also the author of four books of nonfiction, including "Way Down in the Hole: The Meteoric Rise," and "Tragic Fall and Ultimate Redemption of America’s Most Promising Cop."