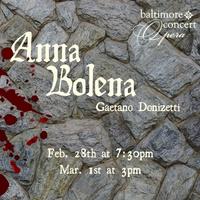 Gaetano Donizetti was particularly entranced with the Tudor period of English history, and its queens in particular.  Anna Bolena, about King Henry VIII's second wife Anne Boleyn, was the first opera in the series referred to as "the Three Donizetti Queens."  A powerhouse soprano role, Anna stands at the center of a whirlwind of intrigue, infidelity, and torture. She is betrayed by the King's appetites and the machinations of the men around her, and the opera documents Anna's inevitable progression to the Tower of London and her ultimate execution in true bel canto style.

Join us for a free pre-performance lecture 30 minutes before each performance.