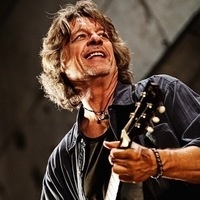 Back in the mid- to late ’70s, one of my favorite singer-songwriters was Indiana-born and Northern California–raised Dirk Hamilton. He had assimilated bits of Dylan and Van Morrison and various other cool artists into a style that was at once unique and compelling, poetic and prosaic, mystical and heartfelt. He put out four superb albums between 1976 and 1980—You Can Sing on the Left or Bark on the Right, Alias I, Meet Me at the Crux and Thug of Love—and received lots of encouraging press (from me and many others), but for whatever reason, never broke through to the masses and more or less dropped out of music (as a vocation, anyway) during the 1980s. Though he started making albums again in the early ’90s, I didn’t catch up with him again until three or four years ago, when I stumbled across a new CD of his in a used record store. That led me to the Web, where I learned of his exploits during the past decade-plus, which included a move to Texas, of all places, and developing a following in Italy (where he is touring as I write this in early July). I picked up some of the albums I’d missed, and enjoyed parts of all of them, but it’s his latest disc, More Songs from My Cool Life, that’s really knocked me out and reminded what an amazing artist he is. Recently I also saw him perform live for the first time since 1980—solo and with a great three-piece band—and that was mesmerizing, as well. [MIx Magazine - Blair Jackson]