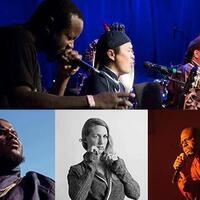 EMBODY, the award-winning, mind-blowing showcase of the human voice, returns to WTMD for a second installment featuring Tuvan throat-singing stars Alash, Baltimore rapper DDm of Bond St. District, singer-songwriter/vocal trumpeter Victoria Vox, New York vocal percussionist/beatboxer pioneer D.O.A., Baltimore vocal artist Shodekeh, singer/rapper Jasmine Pope and more! This is a vocal-only show. There are no instruments -- only the human voice. The musicians will perform a mix of solo sets, vocal ensembles and collaborations. Chances are, you've never seen anything like this before. The entire show will be broadcast live on air, with a live studio audience. Last year's EMBODY won a Best of Baltimore award from Baltimore Magazine for "Best Showcase of the Human Voice." They wrote: "That time Shodekeh led a hoard of local musicians (Dan Deacon, Wendel Patrick, Brooks Long, J Pope, etc.) and the packed house at WTMD on a musical journey, combining sounds into an oddly beautiful symphony? Let’s just say we never knew we could sound so cool."

Alash are masters of Tuvan throat singing, a remarkable technique for singing multiple pitches at the same time. Believing that traditional music must constantly evolve, the musicians subtly infuse their songs with western elements, creating their own unique style that is fresh and new, yet true to their Tuvan musical heritage.Their latest album, "Achai," featuring guest performances by Baltimore's own Shodekeh, was recently inducted into the Smithsonian Folkways Recordings.

One half of the acclaimed Baltimore hip-hop duo Bond St. District, DDm is one of Baltimore's most talented and charismatic rappers. Their debut album, "A Church on Vulcan" won a Best of Baltimore award for Best Album 2017 in Baltimore Magazine.

A master of the mouth trumpet, Victoria Vox is a singer-songwriter who has traveled the world performing solo on ukulele and with a band. She's been featured in the Wall Street Journal and has appeared on "The Tonight Show With Jay Leno" and Maryland Public Television. For this installment of EMBODY, Vox will be leading a vocal-only ensemble with several other musicians.

Dread Archie Jr. (DOA) is a graduate of the world renowned William Esper Studio in New York City. He is an actor, comedian, recording artist, and well known master vocal percussionist. A veteran of film, stage, television, radio and recordings his career has spanned three decades from the early days of hip-hop through the present day. He is the creator, producer and host of his own live comedy show entitled Dread Archie Jr. & Friends and the co-creator and founding member of the world's foremost group of vocal percussionist MB 2000 (featuring himself as D.O.A, Kenny Muhammad and Emanon Johnson).

Baltimore vocal percussionist Shodekeh has performed as a soloist with conductor Marin Alsop and the Baltimore Symphony Orchestra, and has traveled to Tuva to perform with Alash and the Tuvan National Orchestra. He provides vocal accompaniment for ballet and modern dance classes at Towson University and New York University. Shodekeh founded the EMBODY series in 2010, and brought it to WTMD in fall 2016. Shodekeh is one of 7 artists featured in the new documentary "Our Rhythm."