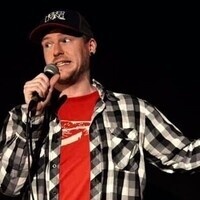 Michael Furr is best known as a stand-up comedian, improv coach, and director, and as the booking manager of the Lou Costello Room Comedy Club. He is a regular host at Magooby’s Joke House, headlines clubs all over the East Coast, and recently released his hit special, “Straight Acting” on Amazon Prime Video, Spotify, and iTunes.

Poe's Comedy Cabaret does not have a 2-item minimum, and ticket holders get a discount on valet parking.