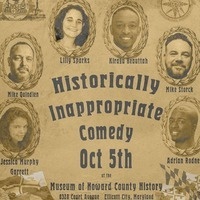 Doors are at 7:00 Show Time is 7:30 Monument City Brewing CompanyBeer and tasty Wine will be for sale at the event. Headliner is Mike Storck Mike Storck has performed at the Boston Comedy Festival, the Asheville Comedy Festival, the Prince Edward Island Festival, and the Laughing Skull Festival in Atlanta, GA. He was a contributing writer for “The Complete Idiotʼs Guide to Jokes” and the book “Kiss Your Butts Goodbye”. In 2007 he was the Mid-Atlantic winner of “HBOʼs Lucky 21” contest. He has been heard on the Nationally Syndicated “Bob and Tom” radio show, the Canadian radio show and podcast “Whatʼs So Funny” and is a regularly featured comic on XM Satellite Radio. Velocity Magazine called him, “...funnier than a rubber crucifix.”. The Ottawa Comedy Resource stated, “...Mike tore the room apart with stunningly good, original and smart stuff. He may very well be the best act on the “alternative” circuit...” and “...delivered cleanly without pretense or exaggerated character, heʼs just being himself, if itʼs rehearsed it doesnʼt show.” Sén magazine said, “... Storck had my guts spilling out of my splitting sides...” Mike continues to work the comedy club circuit across the United States and Canada, continually writing and performing new material. ________ Features: Kiragu Beauttah, Adrian Rodney, Lilly Sparks, Jessica Murphy Garrett Host Mike Quindlen (Founder and Director of the Ellicott Silly Comedy Festival) @mikequindlen