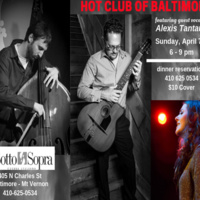 Make plans to come to Sotto Sopra Restaurant on Sunday, April 7th to listen to the Hot Club of Baltimore, a gypsy jazz group specializing in the vast repertoire of vintage jazz including early swing, musette waltzes, bebop and French standards from the 30’s and 40’s.

In 2012, Michael Joseph Harris dove into the music of legendary French Manouche guitarist Django Reinhardt which led to the creation of Hot Club of Baltimore. He also produced the popular HD concert video titled "Ultrafaux & Hot Club of Baltimore," and his original song "Latcho Dromo" was chosen for inclusion on an International compilation produced by Jon Larsen called Django Festival #9.

A graduate of the East Carolina and Towson University jazz programs, Shawn Simon is a sought-after bassist on the East Coast traditional jazz and popular music circuit. Currently on the faculty at Loyola University, he has had the privilege to perform with a variety of jazz artists, including Terrell Stafford, Tim Warfield, Warren Wolf, William Goffigan, and Nicholas Payton.

Along with the musicians, Michael Joseph Harris and Shawn Simon, you will be treated to their song stylings from the young chanteuse Alexis Tantau who will mesmerize you with her authentic treatment of songs from Edith Piaf to Ella Fitzgerald.

$10 per person cover with dinner reservations