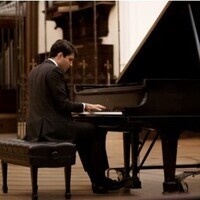 Pianist Jason Solounias began his studies in his home town of Havre de Grace, Maryland with Irene Yeakel and went on to complete his Bachelors of Arts at Shepherd University with Scott Beard. He received his Master’s of Music and Doctorate of Musical Arts from the Catholic University of America under the direction of Jim Litzelman and Jose Ramos Santana. He has also worked with pedagogues including Emanuel Krasovsky, John Perry, and Leon Fleisher.

Solounias has performed across the United States and Europe, ranging from the Kennedy Center to Southwark Cathedral, including performances at Millennium Stage, the Lincoln Theater, Steinway Society of Puerto Rico, Duomo di Almalfi, Junior Soto Recital Hall, The Arts Club of Washington, WETA, Church of Epiphany Concert Series, and the Lisner Auditorium.

Solounias has many years of teaching experience and has worked in a variety of institutions including a university preparatory school, as a freelance teacher, and in private schools. Solounias is a faculty member at Levine Music in Washington D.C. and at Opal Music Studio in Alexandria Virginia.