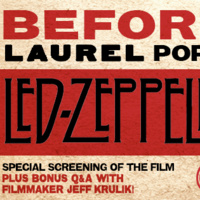 To celebrate the 50th anniversary of the legendary Laurel Pop Festival, join the Laurel History Boys and filmmaker Jeff Krulik for a special screening of his fantastic documentary, "Led Zeppelin Played Here". Did Led Zeppelin perform in front of about 50 confused teenagers at the Wheaton Youth Center in 1969, some six months before headlining the Laurel Pop Festival? This entertaining film features interviews with rock writers, musicians, fans, and several who claim they witnessed history that night. Stick around for a fun Q&A session with Jeff after the film!