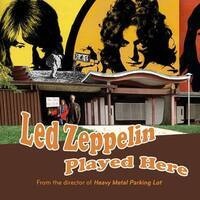 Led Zeppelin Played Here explores the start of the modern rock concert industry, focusing on Led Zeppelin’s first month in the US, and a concert mystery: Did they play on January 20, 1969 in a suburban Maryland gymnasium, in front of 50 confused teenagers, while President Richard Nixon was celebrating his first inauguration nearby. Many swear the concert took place, but just as many cast doubt. Did it really happen? Or over forty years later, is it some sort of a ‘Rock-and-Roll Rashomon’ re-imagining of history? Featuring interviews with rock writers, musicians, and fans, and several who claim they were there witnessing history that night.

Celebrate the 50th anniversary of Led Zeppelin’s concert at the Baltimore Civic Center with this examination of their rumoured first show in Maryland!

Hosted by director Jeff Krulik. Q&A after the screening!