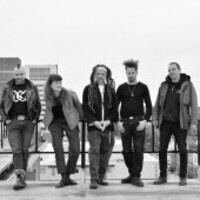 Live Lunch with The Scotch Bonnets

Join us at WTMD on Friday September 20th for a Live Lunch performance and broadcast with The Scotch Bonnets.

The Baltimore reggae rockers have been skanking across the land for a decade now and they recently released a new album “Come On Over” on Jump Up Records.

And the Scotch Bonnets are stopping by WTMD ahead of their performance at the Pigtown Festival, to play some songs for you, for Live Lunch … Friday – at the WTMD studios, 1 Olympic Place in Towson.

Doors are 11:30, show time is 12 noon, admission is free and seating is limited.

Live Lunch is made possible by Cunningham’s Cafe & Bakery, Music Go Round – Cockeysville, and the Mt. Washington Tavern.