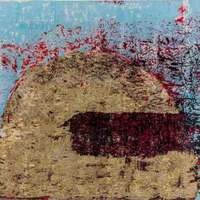 Mark Bradford: Tomorrow Is Another Day

Mark Bradford’s exhibition for the U.S. Pavilion at the Venice Biennale was born out of his longtime commitment to the inherently social nature of the material world we all inhabit.
For Bradford (American, b. 1961), abstraction is not opposed to content; it embodies it. His selection of ordinary materials represents the hair salon, Home Depot, and the streets of Los Angeles. The Baltimore exhibition brings together the works from Venice and includes a new site-specific installation, a spectacular painterly “waterfall” in the rotunda adjacent to the exhibition galleries in the Contemporary Wing.

Tomorrow Is Another Day takes visitors through a progression of installations that incorporate themes and figures from Bradford’s personal life, Greek mythology, and the universe. Among the works from Venice are Spoiled Foot, a suspended swollen mass with a black and red pockmarked surface that pushes visitors to the periphery of the room, and “The Odyssey” series—a suite of three shimmering, black-purple paintings made of endpapers. These works surround Medusa, a heaping and tangled sculpture of black bleached paper inspired by accounts of her as a beautiful and powerful woman wronged by Poseidon. A new suite of monumental abstract canvases created with commercial paper that the artist bleached, soaked, and molded by hand include the exhibition title’s namesake, Tomorrow Is Another Day. They suggest both biology and the heavens, as their circles and lines evoke cells of the body as well as planets. The exhibition concludes with Niagara (2005), a video that takes on new meaning as Black identity continues to evolve and “Black Lives Matter” remains an ongoing national conversation. Viewers see Melvin, the artist’s former neighbor, walking away from the camera, just as Marilyn Monroe did in the 1953 film of the same name. Though Melvin’s ill-fitting clothing and the poor, urban neighborhood are heightened by the objectifying angle of the camera, his energetic gait conveys the hope of walking into another tomorrow.