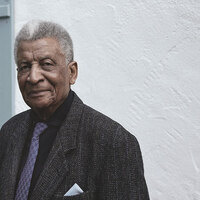 Abdullah Ibrahim, South Africa’s most distinguished pianist, and a world-respected master musician, was born in 1934 in Cape Town and baptized Adolph Johannes Brand. His early musical memories were of traditional African Khoi-san songs and the Christian hymns, gospel tunes and spirituals that he heard from his grandmother, who was a pianist for the local African Methodist Episcopalian church, and his mother, who led the choir. The Cape Town of his childhood was a melting-pot of cultural influences, and the young Dollar Brand, as he became known, was exposed to American jazz, township jive, Cape Malay music, as well as to classical music. Out of this blend of the secular and the religious, the traditional and the modern, developed the distinctive style, harmonies and musical vocabulary that are inimitably his own. Recently, Abdullah was named a Jazz Master as part of the 2019 National Endowment for the Arts (NEA), alongside Maria Schneider and Stanley Crouch.