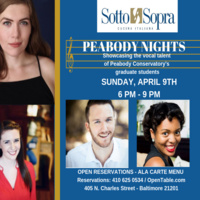 Sotto Sopra Restaurant is taking the opportunity of their 23rd anniversary to also celebrate the musical arts.  Over the 23 years, Sotto Sopra Restaurant has hosted monthly Opera Nights, Jazz Wednesdays, Broadway Nights, International Jazz Pianist Peter Beets and other talented national performers. The musical arts have been a passion of the executive chef/owner Riccardo Bosio.  On this night, the 9th of April, Sotto Sopra will culminate three nights of celebrations: Hot Club of Baltimore – Sunday April 7th, Baltimore Symphony Musicians – Monday, April 8th,  and this evening – April 9th, Peabody Institute graduate student singers to entertain throughout the evening with a selection of songs: opera, operetta, and musical theater.

Along with our popular ala carte menu, Riccardo wants you to enjoy a selection of dishes from his hometown in Italy, Bergamo.  Shayne Kress will be joining us in the kitchen as a guest-chef-for-the-day.

Mezzo Soprano Madilyn Crossland has a passion for engaging audiences with her versatile voice and her evocative acting. A California native, she graduated with a BM from Chapman University. She is pursuing her MM at the Peabody Institute in Baltimore with Elizabeth Futral. In 2018, she was a soloist and street singer in Leonard Bernstein’s Mass, under the baton of Marin Alsop. In 2017, she was seen as the alto soloist in Haydn’s Harmoniemesse with the Peabody Symphony Orchestra. In 2019, she will play the role of La Ciesca in Puccini’s Gianni Schicchi with Peabody Opera Theatre. Miss Crossland is a dedicated ensemble singer and passionate about musical outreach as well, performing educational operas at the Kennedy Center, Segerstrom Center, and Opera Delaware. As a songwriter and cover artist, she strives to create a unique sound and release as much of her passion projects as she can to the public.

Ross Tamaccio is a native of Herndon, Virginia. During his graduate studies at Peabody with Dr. Stanley Cornett, he performed Count Almaviva in Mozart’s Le nozze di Figaro , Papageno in the outreach program of The Magic Flute , and most recently Manfred in the east coast premiere of Jake Heggie’s Out of Darkness: Two Remain . As an oratorio soloist, he has been featured in Handel’s Messiah with the Frederick Chorale, and Brahms’s Requiem with Maryland Choral Society. Additionally Ross has performed in Bach’s B Minor Mass and Carl Orff’s Carmina Burana with the Baltimore Symphony Orchestra. As a highly sought after professional chorister, Ross has also sung with the Basilica of the National Shrine Choir in Washington, the National Cathedral Choir, the National Symphony, and The Thirteen Choir.

Known for her “wonderful high notes” (The Patch) Arianna Rodriguez is a passionate artist eager to share her gift with the world. She has performed the roles of Barbarina in Le Nozze di Figaro, Musetta in La Boheme, Miss Silverpeal in the Impresario, and the Squirrel in L’enfant et les sortileges. She recently performed in the east coast premiere of Jake Heggie’s opera Out of Darkness: Two Remain as Krysia, and the role of Lauretta in Gianni Schicci at Peabody Conservatory. Arianna received her Bachelors of Music from George Mason University where she studied with Samuel L.E. Bonds. She is currently studying for her Master’s degree at the Peabody Conservatory of the Johns Hopkins University under the tutelage of Stanley Cornett.

Monica is a collaborative pianist currently earning a Graduate Performance Diploma in Vocal Accompanying at the Peabody Institute, where she studies with Eileen Cornett. She was awarded a full tuition graduate assistantship with the Peabody Opera Theatre and has since been the rehearsal and orchestra pianist for Bernstein’s MASS and Puccini’s Il Trittico. She has a Bachelors in Piano Performance from West Chester University of Pennsylvania, where she studied with Dr. Carl Cranmer and Dr. Patricia Powell. She graduated with a Masters in Collaborative Piano from the Longy School of Music in Cambridge, MA, where she studied with Brian Moll. She has played in master classes for Dawn Upshaw, John Harbison, and Tara Erraught. Monica’s rehearsal and performance pianist credits include Argento’s Miss Havisham’s Wedding Night with Boston MetroWest Opera; Boston Opera Collaborative’s annual “Opera Bites;” and Dan Shore’s one-act operas The Beautiful Bridegroom and An Embarrassing Position. She served as a rehearsal pianist for BOC’s productions of Gounod’s Faust and Puccini’s La Rondine, and with Boston Midsummer Opera for Donizetti’s Il Campanello and Mascagni’s L’amico Fritz. In 2015, she attended the Alpenkammermusik Festival in Liesing, Austria co-directed by Randall Scarlata and Tanya Bannister. She has been awarded a Young Artist Vocal Coach position at Opera Steamboat for the Summer 2019 season where she will perform Humperdinck’s Hansel and Gretel.