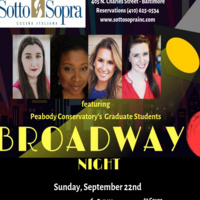 PEABODY NIGHTS - A SALUTE TO BROADWAY

“A Salute to Broadway”

Sotto Sopra Restaurant is excited to continue their  Peabody Nights where our performers are students of the Peabody Institute at the Johns Hopkins University who study with world-renowned teachers, coaches, and directors. This evening is dedicated to showcasing the vocal talent of Peabody’s graduate students with some of the most beloved musicals from Broadway: Music Man, Sweeney Todd, Grease, Cabaret and more.

Our performers for our Peabody Night’s Salute to Broadway:

Cierra Byrd – Mezzo Soprano: A graduate from the Ohio State University with a Bachelor of Music in Voice Performance.  Ms. Byrd has performed as a featured soloist nationally and abroad with recognized ensembles and organizations including The Capriccio Jubilee Singers, Opera Columbus, and The Stacey V. Gibbs Chorale. She is the first winner of the Wilson Vocal Award, a recurrent NATS finalist, a recipient of Peabody’s “Artist Excellence Award”, and has recently placed second in Peabody's Vocal Studies Song Competition and in Baltimore's Wonderlic Competition. She has also had the honor of singing in master classes with renowned tenor, George Shirley and Austrian soprano, Gabriele Lechner.

Carly Cummings – Soprano: Currently studing with Ah Young Hong at Peabody Conservator in the pursuit of her Master Degree in Vocal Performance. Cummings was most recently featured in Chicago Summer Opera’s Le Comte Ory as Alice. Before that she performed in Peabody Conservatory’s Suor Angelica as Prima Sorella Cercatrici. In that same semester she appeared on stage as Doctor #3 in The Falling and the Rising also with Peabody Conservatory. She has performed the operatic roles of Cendrillon in Cendrillon, Adina in L'elisir d'amore, Witch one in Dido and Aeneas, and Girl in Strawberry Fields with San Diego State University’s Opera Theater. In the summer of 2018 she performed Gretel in Hansel und Gretel with the Manhattan Opera Studio in New York.

Lacey Hindman – Soprano: A second year Master’s student in the studio of Denyce Graves and Peggy Baroody at the Peabody Institute. She has been seen as Serpetta in La finta giardiniera and Emma in Albert Herring for the University of Mississippi’s Opera Theatre. Lacey sang the role of Ninetta in La finta semplice and Adele in Die Fledermaus in the UM Opera Theatre scenes program in 2017. As a member of UM Opera Theatre, Lacey performed in the world premiere of Hamlet, Prince of Denmark at the Ford Center of Oxford, MS and the Vinohrady Opera House of Prague, Czech Republic. In the summer of 2017, she joined the Chicago Summer Opera performing the role of Second Woman and covering Belinda in Dido & Aeneas. She also performed the roles of Frasquita in Carmen and Despina in Così fan tutte in the Chicago Summer Opera scenes program.

Monica Daly - Pianist: A collaborative pianist currently earning a Graduate Performance Diploma in Vocal Accompanying at the Peabody Institute of Johns Hopkins University. She was awarded a full tuition graduate assistantship with the Peabody Opera Theatre and has since been the rehearsal and orchestra pianist for Bernstein’s MASS and Puccini’s Il Trittico. She has a Bachelors in Piano Performance from West Chester University of Pennsylvania and a Masters in Collaborative Piano from the Longy School of Music in Cambridge, MA. She has played in master classes for Dawn Upshaw, John Harbison, Tara Erraught, Sharon Sweet, Roger Vignoles, and Allen Perriello. In 2015, she attended the Alpenkammermusik Festival in Liesing, Austria co-directed by Randall Scarlata and Tanya Bannister. In the summer of 2019, she was granted the young artist vocal coach position at Opera Steamboat, where she performed Humperdinck’s Hansel and Gretel. Monica’s upcoming engagements include the premiere of Mechem’s Pride and Prejudice and Puccini’s La Rondine at Peabody for their 2019-2020 season.

$5 per person cover plus dinner reservations