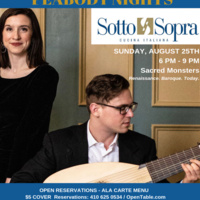 Kyle Leigh Carney and Cameron Welke join us at Sotto Sopra Restaurant on Sunday, August 25th  just after their return from their performances in Italy.  Dine with us and experience the sounds of the Renaissance with Sacred Monster.   There will be a $5 cover per person for that evening.  Reservations can be placed at 410 625 0534 or OpenTable.com. Sacred Monsters will be performing from 6 pm to 9 pm

Sacred Monsters is a collaboration between soprano Kyle Leigh Carney and lutenist Cameron Welke dedicated to connecting the stories of the Renaissance and Baroque song repertoire with the lived experiences of audiences today. The ensemble's name is derived from the eighteenth-century term "monstre sacré," used by the French to describe those larger-than-life performers whose eccentricities fueled their performing lives and kept their audiences engaged in their work. Sacred Monsters take inspiration from the duality inherent in their name and aim to bring out both the sacred and the monstrous within Renaissance and Baroque music, inviting their audiences to enter with them into the sublime and grotesque world of seventeenth- and eighteenth-century music.

$5 per person cover plus dinner reservations