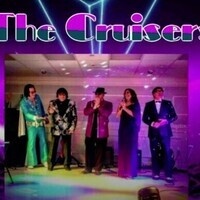 Rock Around the Jukebox with The Cruisers

Put on your bobby socks, roll up your old blues jeans and cruise into the 50’s and 60’s with ‘The Cruisers’. Lets twist and shout just like in the good old days.

Featuring Tribute Artists:
*The Big Bopper-Gary Baker was inducted into the Maryland Entertainment Hall of Fame in May 2014. He’s been taking audiences to The Hop with his Rockin’ Around The Jukebox Show performing in MD., DE, PA and NJ.

*Teen Angel-Connie McGuirk will have you dancing in the street with her tribute to the teen angels of the 50’s and 60’s, including The Shirelles, Connie Stevens, The Crystals, Brenda Lee, The Ronettes and the legendary Patsy Cline just to name a few.

*Tribute To Buddy Holly- Steve Riddle will have you rockin’ in your seats with his dynamic moves and looks!

*Tribute To Roy Orbison-Terry Harris is the #1 rated Roy Orbison tribute artist in the state of Maryland and was inducted into the Maryland Entertainment Hall Of Fame in 2013.