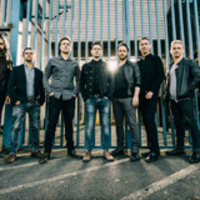 SKERRYVORE is an award-winning eight piece band from Scotland. Hailing from the island of Tiree, Skerryvore formed in 2005; their music is an eclectic fusion of rock, pop and traditional music with an emphatic thundering of drums and bagpipes and is as rich as a single malt scotch. With their outstanding musicianship and the mesmerizing voice of award-winning Dalglish, Skerryvore has become an international sensation.  In addition to Dalglish on lead vocals and guitar, the band includes brothers Daniel Gillespie (accordion) and Martin Gillespie (bagpipes, whistles & accordions), Fraser West (drums & vocals), Craig Espie (fiddles), Alan Scobie (keyboards), Jodie Bremaneson (bass) and Scott Wood (bagpipes).

Skerryvore is touring behind their 7th album, Evo (June 2018), which is all original tunes plus one cover song, runs the gauntlet from big blast numbers to heartfelt reflective tracks. The band’s first 6 albums have sold over 60,000 physical CDs and well over 5 million streams.