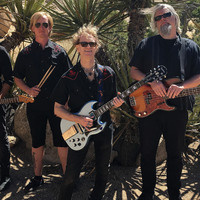 Originally formed in the summer of 1979 in Washington, D.C. -- after guitarist David Arnson envisioned a new surf band for the modern era that combined elements of psychedelic rock, 60s instrumentals and punk rock energy -- they toured extensively throughout the US and released 2 EPs (Wavelength, Sonar Safari) and 3 singles that placed as high as #25 on the national college radio charts.

In 1985 Arnson decided to move west to California, surf rock’s ground zero, and regrouped with guitarist/sax player Dan “Dano” Sullivan. Once the lineup was complete, they debuted at local college radio station KXLU’s “Surf Day" in June 1986, and a new era was born. Continuing steadily throughout the 80s, 90s and 2000s, they released 3 full-length albums (Reverb Sun in 1991; Death Valley Coastline in 1996), and Mojave Reef  in 2002), a 10” EP (East West), a live album, and a best of, and appeared on over 22 compilations, including the legendary and highly influential Rhino 4 CD set Cowabunga! The Surf Box.

In 2013, with a new band and focused vision, Insect Surfers released the critically acclaimed Infra Green, their first new record in over 10 years, and brought it to life live with a vengeance, embarking on their first full European tour. Four years later they released their 4th full-length album, Datura Moon; returned to Europe; and continued to release songs on several compilations. For the 40th anniversary celebration, Insect Surfers released a special limited-edition purple vinyl version of Datura Moon, and the CD Living Fossils -- a sonic archaeology of rare tracks, demos, outtakes, and covers spanning 30 years.