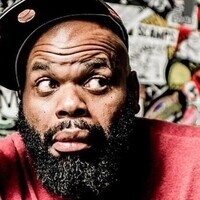 The Comedy of Dark Mark Joyner

"Dark Mark" Joyner is one of the most exciting new comedians to come along in some time. His edgy conversational brand of comedy and almost childlike enthusiasm are hilarious and down right refreshing. Originally from Baltimore, Mark came to comedy after a troubled adolescence and years of real life experiences that add a unique and somewhat visceral quality to his stand up. With subject matter ranging from poverty, racism, lizard people conspiracies, classic cartoons and even reverse centaurs, Mark never disappoints. He has traveled all over the country appearing with such notable acts as Wyatt Cenac (from Comedy Central's The Daily Show) and Todd Rexx (HBO, The Tonight Show, BET).

There are no drink minimums at Poe's Comedy Cabaret, and ticketholders receive a $5 discount on valet parking.