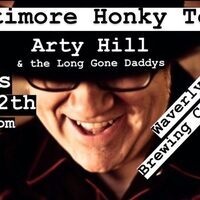 Have you ever said to yourself one these things?
"I wish Baltimore had more classic country music happening."
"I wish I could go out dancing and learn how to two-step"
"I wish I could hang out at a bar, listen to country music, listen to local musicians, support a local brewery, and drink beer all at the same time!"
"I need to dance with my friends and hang out!“
"I love Arty Hill and the Long Gone Daddys!"

If you said yes to any of those, the Baltimore Honky-Tonk & Two-Stepping is the place you'll want to be on Thursday the 12th of December! Come on out and let's grow a fun classic country music scene here in Baltimore together. No experience needed!

From Baltimore, MD to Central Texas, Arty Hill packs the bars and dance floors with his unique brand of modern Honky Tonk. He sings with an "'everyman' quality…reminiscent of Johnny Cash." (Vintage Guitar Magazine). His songs - marrying the soul of classic country with the wry storytelling of Guy Clark and Townes Van Zandt - have been recorded by the Grammy-nominated Kenny and Amanda Smith Band, Alt-Country pioneers Jason & the Scorchers, Rockabilly Queen Bee Marti Brom, and Austin’s Texas Sapphires, among others. His recordings have topped the FAR (Freeform American Roots) chart, and his songs have appeared in two seasons of "Gun it with Bennie Spies" on the Sportsman Channel and in the 2017 movie "I Don't Feel at Home in This World Anymore" starring Elijah Wood. Arty is also co-founder of the Hank Williams Songwriting Workshop in Montgomery, AL, and was a 2018 instructor at the Augusta Heritage Center's Classic Country Week in Elkins, WVa. His latest recording, "Live: Church on Saturday Night," is a shack-shaking live recording of Arty and his top notch band, the Long Gone Daddys (Dave Chappell - guitar, Lynn Kasdorf - pedal steel, Ira Gitlin - upright bass, Ed Hough - drums).

This band will be transforming Waverly Brewing Company into a Honky-Tonk with your help. Bring your dancing shoes. Join band on the dance floor, grab a pint or two, and let’s pack the place with a big two-stepping party!