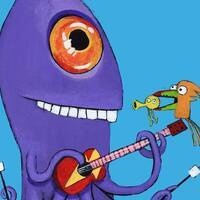 We're throwing open our doors for this new indoor/outdoor version of Saturday Morning Tunes, featuring live music on the plaza and the main stage!  We're thrilled to welcome children's musician and storyteller Barry Louis Polisar, who wrote "All I Want Is You," the theme song to the hit movie "Juno."  And we'll have the debut of the Saturday Morning Tunes house band -- the Cartunes!! -- performing theme songs to your favorite cartoons like "Duck Tales," "Bob the Builder," "Inspector Gadget," "Daniel Tiger" and many more.  The Walters Art Museum and Garrison Forest School will be here offering arts and crafts for the kids, and Race Pace Bicycles will be letting kids ride bicycles on the plaza!!  Snacks are included, and the kids can pick up one of our inflatable instruments and play along with the bands.

Join us for the bigger, better, summer edition of Saturday Morning Tunes. We'll see you rain or shine!

Barry Louis Polisar is a five-time Parents’ Choice Award winner, and a pioneer in the world of music for children. He has recorded and shared his songs, poems, stories, and books with audiences throughout the world. Barry performs his songs on two different Grammy Award-winning albums and sings his song "All I Want is You" in the opening credits of the film "Juno."

Barry has written songs for "Sesame Street" and The Weekly Reader and starred in a television show for children that won two Emmy awards. Barry has performed at The White House, The Smithsonian, and The Kennedy Center for the Performing Arts.

Barry’s songs are featured in dozens of TV commercials broadcast around the world, and can also be heard on television shows and in feature films. His songs have been recorded and performed by singers and musicians in different countries and his work has been featured on National Public Radio and written about in The Washington Post, The Boston Globe, Newsweek, and People Magazine.