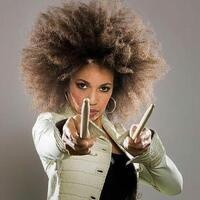 Cindy Blackman Santana is a virtuoso drummer whose artistry spans the realms of jazz and rock. As a bandleader and as a musician, Cindy is a sound innovator with a passion for pushing creative boundaries and exploring movement and change. She is as known for the nuances and colors she brings to her beats and fills as she is for the sheer power of her soulful playing. “Some drummers act, some react. Some keep time, others create it. Cindy Blackman Santana is among the few who can,” writes Mike Zwerin of the International Herald Tribune.

Cindy has been creating magnificent musical time and space since the beginning of her career as a busking street performer in New York City in the ‘80s through to the present day.  Since 2010, Cindy Blackman Santana has been a major creative force touring the world and recording with the universally beloved band of her husband, Carlos Santana.