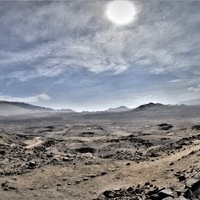 Distinguished Lecture in Art of the Ancient Americas

Charles Stanish, University of South Florida presents "Geoglyphs and the Creation of a Coastal Andean Landscape."

Andean peoples constructed some of the most sophisticated landscapes of the ancient world.  Manifest as figural and linear geoglyphs, ephemeral structures, and terraced platforms, the earth’s surface was transformed into vast theatres for public performance. Structured rock formations, or geoglyphs, challenge questions of scale and in how the landscape was perceived, used and translated.  This talk traces the development of these forms from the earliest in the Casma Valley to those of the Paracas peoples in south-central Peru.  We will see how these systematically designed pathways -- nearly invisible to the untrained eye – accommodated pilgrimage and framed elaborate building complexes. Timing of processional activity was guided by astronomical phenomena. Sites that marked solstices and equinoxes are shown to be integral to the formation of a sacred geography.

About the distinguished lecturer

Charles Stanish (Ph.D., Chicago) is Executive Director of the Institute for the Advanced Study of Culture and the Environment at the University of South Florida.  He has served as director of the Cotsen Institute of Archaeology, UCLA, and curator/chair of the Anthropology Department of the Chicago Field Museum. His extensive research in Peru, Bolivia, and Chile addresses the roles that trade, war, ritual, and labor organization played in the development of human cooperation and complex society. Stanish has authored several books that include, Ancient Andean Political Economy (1992), Ritual and Pilgrimage in the Ancient Andes (with B. Bauer, 2001),  Ancient Titicaca: The Evolution of Complex Society in Southern Peru and Northern Bolivia (2003), and Evolution of Human Co-operation (2017).  For six years, he served as Senior Fellow of Pre-Columbian Studies, Dumbarton Oaks. He is a fellow of the American Academy of Arts and Sciences, and is a member of the National Academy of Sciences.

Free and open to the public