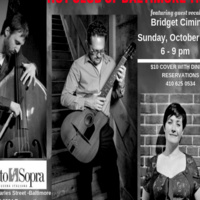 Mark your calendar and make your dinner reservations early for a hot night of Gypsy Jazz from Hot Club of Baltimore Trio on Sunday, October 6th here at Sotto Sopra Restaurant. This sizzling trio will be playing from 6 pm to 9 pm – the cover is just $10 per person.

The Hot Club of Baltimore specializes in a vast repertoire of vintage jazz including early swing, musette waltzes, bebop and French standards from the 30’s and 40’s. Along with the musicians you will be treated to the song stylings from Bridget Cimino, a master of the trad jazz style and her ability to belt out a tune with sass and charm, the way they used to do back in the 30’s.

Michael Joseph Harris, lead guitarist for Hot Club of Baltimore, is refreshed and inspired from his summer touring.  Michael was invited to Preston Jazz and improvisation Festival in the UK and toured the region in early June followed by a week of teaching among other top players (Angelo Debarre, Sebastien Giniaux, Gonzalo Bergara) at Django In June Jazz camp in Massachusetts. Michael  then spent a week in the Netherlands studying with gypsy jazz legend Fapy Lafertin at the exclusive Sinti Camp in Neunen. Michael returns with a wealth of new knowledge and inspiration to share with us here at Sotto Sopra.

Joining Michael Joseph Harris and Bridget Cimino will be joined by  Shawn Simon on bass. A graduate of the East Carolina and Towson University jazz programs, Shawn Simon is a sought-after bassist on the East Coast traditional jazz and popular music circuit. Currently on the faculty at Loyola University, he has had the privilege to perform with a variety of jazz artists, including Terrell Stafford, Tim Warfield, Warren Wolf, William Goffigan, and Nicholas Payton.

Sotto Sopra Restaurant is an award-winning Northern Italian Restaurant with a Maryland accent that has enjoyed success for over 22 years located on Baltimore’s historical byway Charles Street at the archway to the city’s cultural Mt. Vernon district.  It’s 19th century building’s dining room boasts tall ceilings, tile floors, gilded mirrors and a contemporary mural that depicts restaurant life. Not only known for their Italian cuisine with a Maryland accent, Sotto Sopra regularly host evenings of Opera, Broadway, and Jazz performances.