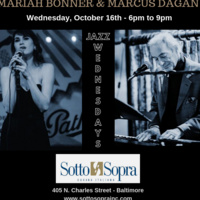 Join us  at Sotto Sopra Restaurant  for dinner on Wednesday, October 16th from 6pm-9-pm when Mariah Bonner and Marcus Dagan put their jazz interpretation on some of your favorite classics like Dream A Little Dream, Bye Bye Blackbird and Keepin’ Out of Mischief. Make your dinner reservation (410) 625-0545 or www.OpenTable.com.

Mariah Bonner is a Baltimore born actress, singer – all around entertainer who has study and worked in France, graduated the Guildhall School of Music & Drama in London, and eventually moved to Los Angeles in 2008 where she actively worked as an actress as well as a producer.  Now back in Baltimore since 2017 she and Marcus Dagan have taken their cabaret show on the road.

Marcus Dagan arrived on Baltimore's music scene in 1982, where he performed regularly at the Belvedere. Through the years he has cultivated a discerning audience with his unique lyrical interpretations and original material. Marcus’ career has taken him all over the world, from Las Vegas to Saint Tropez, London and Paris. He recently recorded his original song “Crossing Over” in Las Vegas.