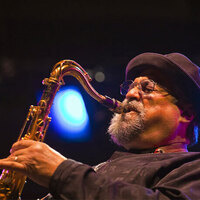 Joe Lovano is a Grammy-winning saxophonist, composer, and arranger. Down Beat magazine has twice named him Jazz Artist of the Year, and he scored a prestigious trifecta in 1998: nominations for Musician of the Year, Improviser of the Year, and Best Tenor Saxophonist in the New York Jazz Awards. He also topped both the Down Beat readers and critics polls as Tenor Player of the Year in 2000. Lovano attended Berklee in the early 1970s and received an honorary doctor of music degree from the college in 1998. In the fall of 2001 he began a prestigious teaching residency in the Berklee Ensemble Department, known as the Gary Burton Chair in Jazz Performance. Since joining the Berklee faculty, the Blue Note artist has several albums as a leader and appeared on dozens of other recordings. He is also a faculty member in the Berklee Global Jazz Inst