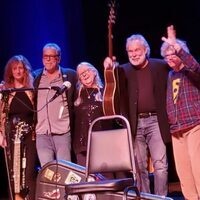 On A Winter's Night 25th Anniversary at Birchmere

The 25th anniversary of “On A Winter’s Night”, a collection of songs by some of the brightest stars of  the singer-songwriter movement, brings five of the artists together again for a moveable feast of song.  In 1994 Christine Lavin put together a compilation of winter love songs by some of her favorite songwriters, and the next decade found a cast of singer-songwriters on tour during the cold, dark months, bringing warmth and light to audiences across the country.  Tours included Cliff Eberhardt, John Gorka, Patty Larkin, Christine Lavin and Cheryl Wheeler, who have all gone on to release multiple albums of their own over the years.

Twenty-five years later these five artists are back together by popular demand to celebrate and share old songs and new in what has become a kind of mini folk festival.  It’s a festival of light and song, that strikes a chord with old fans and new alike.

In March 2020 they’ll perform concerts on the East Coast, up the West Coast, winding up their tour in Colorado before the snow melts.  This moment is a unique chance to see friends together again, enjoying the company of each other, making music together one more time.