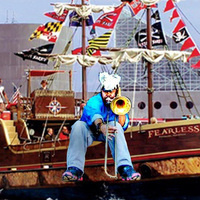 The pandemic may have forced us to cancel our 2020 First Thursday Festival series, but we're still committed to bringing free live music to Baltimore.

And on Saturday, Aug. 8, WTMD, Stages Music Arts and Urban Pirates are partnering to present the Pirate Radio Cruise, a floating live concert in the Baltimore Harbor featuring the irresistible funk and New Orleans jazz of Rufus Roundtree and Da Bmore Brass Factory.

The cruise starts at 6 p.m. offshore from Canton Waterfront Park, before heading to the Broadway pier in Fells Point, the Inner Harbor, Federal Hill Park and the Tide Point pier by Under Armour in Locust Point.

The ship will float nearby each of these locations for about 15 minutes before returning to dock around 8 p.m.

Here is the schedule:

Only the band and a skeleton crew will be aboard the ship, which typically holds as many as 80-some passengers. You can enjoy the music at a safe distance from the shore, or aboard your own vessel in the Baltimore harbor. If you're watching from land, be sure to follow city guidelines for social distancing.