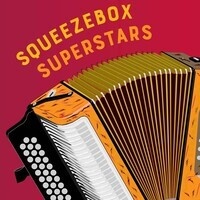 Billy McComiskey is a world-renowned accordion, or “box,” player and composer who was taught by the great Sean McGlynn, a master of the East Galway style of Irish traditional music.

McComiskey was born in 1951 in Brooklyn, New York, to a family steeped in Irish music and dance. During the 1970s and ‘80s, he won gold and silver in the prestigious All-Ireland musical competitions in solo accordion and in duets with the renowned fiddler, Brendan Mulvihill (son of 1984 National Heritage Fellow, Martin Mulvihill).

In the mid-1970s, McComiskey, Mulvihill, and guitarist Andy O’Brien were invited to play a weekend gig at the Dubliner in Washington, DC by Lou Thompson and Peggy Reardon, who were interested in growing an Irish music community in the region. Soon after, McComiskey played at the Smithsonian Folklife Festival during the U.S. Bicentennial, and after meeting his future wife, Annie, they settled in Baltimore. Over decades, McComiskey has played an integral role in building the now thriving Baltimore-DC Irish traditional music scene, connecting the deep legacy of the Slieve Aughty traditions of New York to the region. Through to today, he teaches musicians all over the world, as well as in his home state, as a master through the Maryland Traditions apprenticeship program. He won the Irish Echo’s Album of the Year for his 2008 Outside the Box and was their 2011 Traditional Artist of the Year. He has been invited to share his outstanding talents at the White House, the Kennedy Center, and throughout the U.S., Ireland, and beyond.

Rob Curto is an accordionist, composer, and pianist based in Philadelphia and New York City.

Curto has a prolific career touring and composing, gaining notoriety for his mastery of the piano accordion, exciting harmonic blends, and general musicianship across genres and musical boundaries.

He is a founding member of the "Brazilian Bluegrass" band Matuto, which gained a following across the US and Canada, was selected to showcase at WOMEX, and toured extensively across Africa, Asia, Europe, and other areas, chosen to represent the US State Department overseas.

He has released several CDs and EPs as a band leader and is a prolific composer/arranger, including his latest musical project, the unabashedly accordion-centric American roots band, Fish Harmonics, featuring smokin' accordion along with bass fiddle, groove-oriented drumming, and old-timey strings. Fish Harmonics' debut EP, ONE, is available streaming in all the places.

Since relocating to Philadelphia, Curto has developed an interest in Irish button box, adding B/C button accordion to his repertoire. He studies with NEA National Heritage Fellow and multi-All Ireland Champion, Billy McComisky, and occasionally with John Whelan and PJ Hernon.

A fearless and charismatic presence, Simone Baron is a concert pianist, accordionist and composer of infectious energy. She engages with a broad range of musical languages, traditions, and art forms, and has performed throughout Europe, Israel and North America (Carnegie Hall, Kennedy Center). While finishing her formal studies in piano and conducting at the Buchmann-Mehta School (Tel Aviv University) and Oberlin Conservatory, she fell in love with the accordion. Its vibrant sounds and pulsing bellows breathed new life into her musical world which opened the door to multidisciplinary collaborations with dancers, puppeteers, visual artists. In 2016, she founded the ensemble Arco Belo, leading them in performances of compositions and arrangements that reveal a gargantuan musical appetite which pulls language from the jazz, world and contemporary chamber music idioms orchestrated for strings, percussion, bass and piano/accordion. Recently an artist in residence at the Banff Centre, Strathmore and the Washington Jewish Music Festival, Simone's work focuses on experimenting, reimagining and forging a sound at the junction of the familiar and the avant-garde.

In its review of a recording by his band the Polkats, the Washington Post reported that John Shock, “plays the accordion as if it's going out of style yet again. In his hands the squeezebox is everyman's instrument and every song's friend. One moment he's blowing the dust off of Woody Guthrie's dust bowl ballad ‘Do Re MI,’ the next pumping up one of Santiago's infectious polkas with the requisite wind power. Nothing, it seems, is beyond his reach or interest, not ‘Tiny Bubbles’ or ‘Can't Help Falling in Love’ or even a quick and quirky two-step version of Kris Kristofferson's ‘For the Good Times.’”

Shock will be joined on the 7th by long-time musical co-conspirators Paul Margolis (bajo quinto and guitar) and Dan Naiman (saxophone) and by the estimable Jared Denhard (tuba).