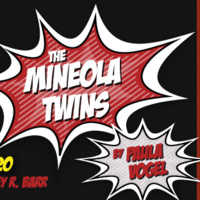 The Mineola Twins at FPCT

A comedy in six scenes, four dreams and seven wigs. There are two ways to produce this play: 1) with good wigs; or 2) with bad wigs. The second way is preferred. Myrna and Myra, almost identical twins, battle each other through the Eisenhower, Nixon and Reagan/Bush years over Virginity, Vietnam and Family Values. Vogel’s farce explores the divide in American politics and families through generations and hair pieces.

"THE MINEOLA TWINS…bursts forth in its glory…a funny, perceptive, biting take on The American Woman. Vogel was never more political and never more on target."

Lindsey R. Barr makes her FPCT Directorial debut joining the talents of Corey Hennessey, Ally Ibach, Andy Belt, Kyla Tacopina and Rory Kennison.  Fells Point Corner Theatre continues to bring some of the best and brightest of Baltimore theatre in this tale of the American identity.