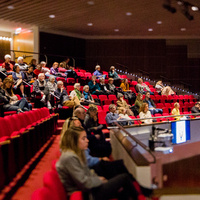 Artists Erin Fostel and Erick Antonio Benitez, recipients of the 2018 Artist Travel Fund awarded by the Municipal Art Society of Baltimore City, traveled to Japan and Colombia, respectively. Join us for a talk followed by a Q&A as they discuss the research conducted on their trips and the impact the travel has had on their studio practice. A reception will follow.

About the Artists
Erick Antonio Benitez is a Salvadoran-American multidisciplinary artist, musician, organizer, and curator based in Baltimore, MD. He received a BFA at the Maryland Institute College of Art in 2014. Winner of the Janet & Walter Sondheim Artscape Prize in 2018, Benitez has exhibited internationally. He is also a recipient of a Ruby Artist Project grant; The Contemporary: Grit Fund 2; Y.L. Hoi Memorial Award; and a residency at the Studios at MASS MoCA.

Erin Fostel was born in Baltimore, MD, where she lives and works. She received a BFA at the Maryland Institute College of Art in 2004. More than a decade later, Fostel continues to explore visual storytelling through drawing. In her visual art, she pushes the tonal boundaries of charcoal, which is her primary medium. The artist’s works of art have been included in local and international publications about drawing.

This panel discussion will be followed by a public reception

This program is co-presented by the Walters Art Museum, the Baltimore Office of Promotion & The Arts, and the Municipal Art Society of Baltimore City.