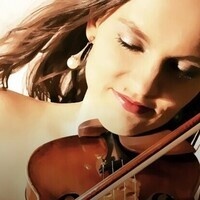 (In association with the Susquehanna Symphony Orchestra)

Kinga Augustyn is a New York City-based virtuoso concert violinist and recording artist. One of the last students of the legendary Dorothy DeLay at The Juilliard School, Ms. Augustyn has a large repertoire of more than 40 concerti, both standard and lesser–known, that she has performed with such orchestras as the German Kammerorchester Berlin and the Wroclaw Philharmonic.

Augustyn’s expanding discography on major labels such as Naxos, includes the Paganini Caprices, which music critics consider as convincing as Perlman’s or Midori’s, and an “an enduring benchmark” (Classical Net). Augustyn has performed as a soloist with orchestras in the United States, Europe and Asia.